“Regardless of the type of project thrown at us, we believe in having the most stable, reliable and high-performing creative solutions for our clients,” shared Ryan Sullivan, owner of BlueSpeed AV in Tulsa. “Whether it is a home or a special project like this, we always start by focusing on how people will be interacting with the space and build the design around that element.”

When BlueSpeed AV first opened up the van they found that the original battery was being overloaded by the systems already installed by the manufacturer and the wiring had begun to melt to the frame. This was the beginning of a complete gut job on the van’s infrastructure. The mess of wiring had to be cleaned up, the relays and fuses replaced, and networking reworked entirely; and quickly the van’s wiring needs were on par with those of a three bedroom house. 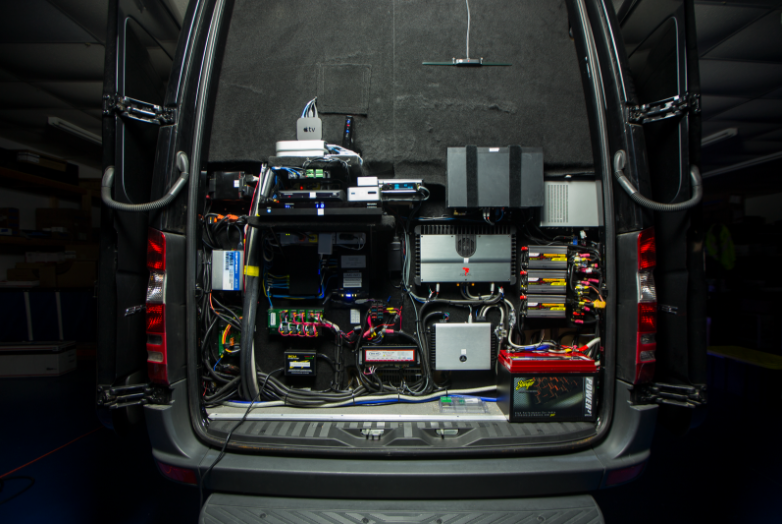 Initially, the coach van manufacturer had installed a Crestron automation system, and it had four remotes to control and interact with the space. The cumbersome design essentially required guests to go through a tutorial in order to use it; time better spent enjoying the the van’s features and festivities on the way to its destination.

The BlueSpeed AV team started the process of centralizing the van with a Savant automation system backed by Apple’s iOS operating system; giving the van’s technology unparalleled usability and reliability. The Savant system acts as the brains controlling of all the systems inside the van, so guests can easily manage and make adjustments to all of the van’s features directly from a dedicated iPad. 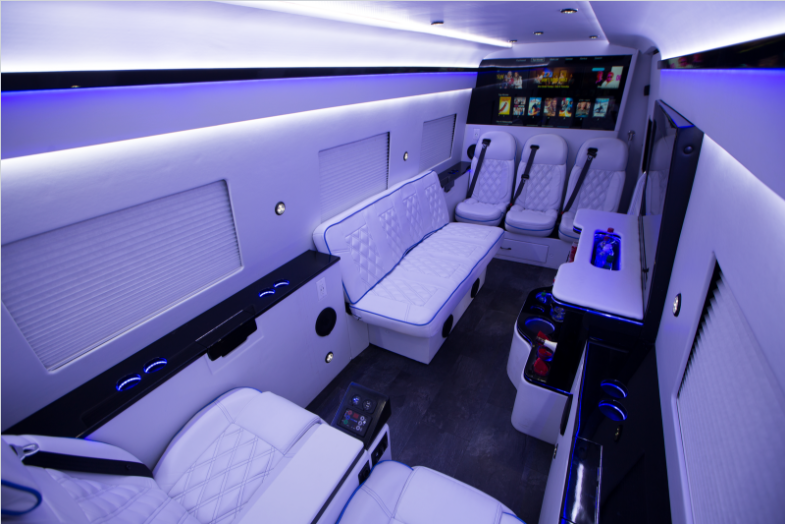 The van includes video and audio distribution with three top-of-the-line Samsung TVs that can display different video feeds and switch between audio channels. This comes in handy when multiple sporting games want to be watched simultaneously as a group. Using the van’s iPad guests can lower the automated Lutron window shades, recline the custom leather couch, and sip drinks from the wet bar; while streaming music from their favorite playlists on Pandora or other players, and viewing photos from their night using their device’s airplay function over the onboard WiFi.

A convenient iPad is stationed between the two, air ride captain chairs at the back of the vehicle, and is perched on a launchport to accommodate charging while still being detachable. If a guest doesn’t have an Airplay function on their phone, a handy audio jack is easily available to hardwire their device to stream content. Although the driving cockpit is independent from the guest quarters, they can easily communicate via intercom between the captain chair iPad and the other tablet in the driver’s area.

BlueSpeed AV not only addressed the automation technology inside the van but also installed custom wood, carpentry, and lighting to create a premier luxury party van the client. With all this top-end technology on board, BlueSpeed ensured that the van’s system could be remotely accessed for any service check-ins. This way, all passengers need do is call the BlueSpeed service team and the issue can be fixed swiftly and off site, without slowing down the fun!